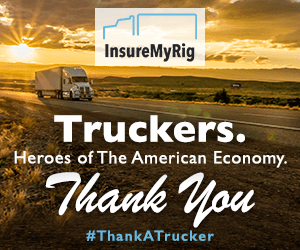 Taking it to a higher power, President Donald Trump offered truckers high praise and the thanks of a grateful nation. “Thank God for truckers,” he said during an April 16 White House event intended to honor the men and women who continue to work the roads despite the risk, and who have been (literally) carrying the nation’s economy since the COVID-19 crisis alarmed officials enough to shut most of it by April.

President Trump, offering his remarks from the White House lawn, was flanked by two trucks and four proud commercial drivers. It also wasn’t the first time he’s thanked truckers for their efforts or invited them to the White House. In his manner, his praise was effusive: “American truckers are the foot soldiers who are really carrying us to victory,” Trump said. “They’ve done an incredible job. We’ve had no problems. It’s been just — it’s been just great.”

Good timing for the industry

Covering the event, Transport Topics reported Trump’s remarks were delivered shortly before he was scheduled to meet with governors on a federal economic road map he intends to recommend for reopening society. Great timing by the negotiator-in-chief, because it’s precisely those folks who need to hear this message most – and as loudly and clearly as possible.

Transport Topics explained the President was due to present data from officials representing myriad sectors, such as health care. Secretary of Transportation Elaine Chao and American Trucking Associations President Chris Spear also joined the President, but the stars of the show were the drivers and the big rigs providing a dramatic and powerful backdrop to their remarks.

A professional driver from Tennessee’s Big G Express and America’s Road Team Captain Stephen Richardson was up first. He said that he had been busy working for Jack Daniel’s during the pandemic – that is delivering the hand sanitizer it began bottling instead of whiskey--all in an effort to help Americans win the war against this pathogen.

Charlton Paul, a driver for UPS Freight out of New York, Tina Peterson, a FedEx Ground contractor Ravenwood Transport from Minnesota, and Dylan Madigan, a DHL Express driver from New Jersey offered their experiences from the road. Transport Topics reported they were given a gold key from President Trump, which the leader of our nation described as an expression of thanks for these front-line essential workers.

Hashtag thank you very much

If you’re thinking that this national outpouring of praise and thanks is unique or unprecedented in modern times you come to close to understanding just how significant a political juncture this is for trucking.

Our country’s financial health is completely reliant on trucking; it’s never been more apparent --- how can anyone ignore trucking’s fundamental and essential role? Fortunately the country is seeing the truth for what it is and expressing it in new and highly public ways – broadly and over social media – another element helping society recognize trucking’s solid contribution to our uniquely American way of life.

For those working the roads, evidence is everywhere just how deeply America’s appreciation has been. Want to get a good feel for this pulse? Twitter has a great channel going right now; hit the link below. Hashtag thank a trucker … who in the industry would have though just how much we’d be trending right now? Interesting times indeed.