Insure My Rig offers commercial truck insurance, click here for coverages. Contact Us today for a no pressure and speedy quote. Our decades worth of experience will make your purchase of commercial insurance easier on you!

"Advertising" - Highway Patrol with their lights on

"Alligator" - Large piece of a tire on the road

"At your back door" - Behind your truck

"Bear bait" - Leader in a group of trucks

"Bear report" - Asking for the location of the cops

"Better half" - Husband or wife

"Bobtail" - Traveling without a trailer

"Brake check" - Jamming on your brakes in traffic

"Breaker" - CB'er who asks to use a channel

"Bug out" - To leave a channel

"Bundled out" - Trailer is fully loaded

"Clean shot" - No highway patrol around

"Down stroke" - A hill going down

"Dragon fly" - A truck with no power

"Eighteen wheeler" - A truck with 18 wheels

"Feed the bears" - Receive a ticket

"Gearslammer" - A trucker who's known to accelerate and decelerate a lot

"Got your ears on?" - Used when asking for someone on the CB

"Grass" - Median strip or side of road

"In the grass" - Pulled over in a median strip

"Juvenile delinquent" - Someone pretending to be a truck driver

"Make the trip?" - Is transmission being received

"On the side" - Pulled over on the shoulder

"Over your shoulder" - Behind you

"Pickle Park Pinger" - A CB with a roger-beep

"Put the pedal to the metal" - Accelerate, speed up

"Shake the leaves" - See what's ahead

"Shiny side" - Top of the trailer

"Skate Board" - A flatbed trailer

"Sweeping leaves" - Bringing up the rear

"Walked over" - Over powered by a stronger c.b. signal

"Yardstick" - Mile markers on the road side 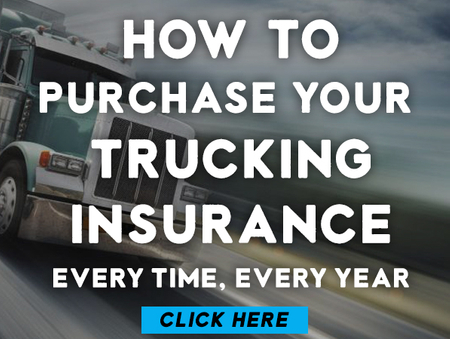 How to Purchase Your Trucking Insurance Every Time, Every Year